Our esteemed adjudicators and clinicians 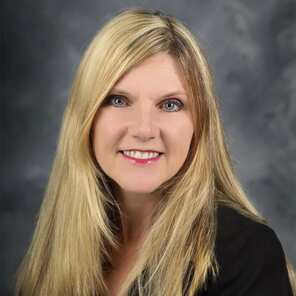 Dr. Melissa Gustafson-Hinds
Melissa Gustafson-Hinds is in her thirteenth year as Director of Bands O’Fallon Township High School in O’Fallon, Illinois. In addition to her teaching duties at O’Fallon Township High School, Dr. Gustafson-Hinds serves as Music Department Chair at OTHS and most recently served as the District VI Illinois Music Educators Association (ILMEA) President.  In her time at OTHS, she has brought the band program to new heights in music excellence.  Under her direction, the OTHS Marching Panthers have been consistent Bands of America (BOA) Regional and Super Regional finalists, Grand National Semi-Finalists, and a Grand National Finalist in 2018.  In 2015, the band marched in the Tournament of Roses Parade in Pasadena, California (and an upcoming appearance now in 2022) and in 2018 the band marched in the Hollywood Christmas Parade in Hollywood, California.  The concert ensembles performed at Carnegie Hall in May 2014, and the Wind Ensemble has performed at the Illinois Superstate Concert Band Festival, the National Concert Band Festival, and the ILMEA State Convention. For a week in February 2015, the OTHS Band Program hosted David Maslanka at and received intensive clinics from him, ending the week with a concert held in his honor. Other distinguished clinicians the band has worked with include James Keene, Steve Steele, Dick Floyd, Mallory Thompson, Kevin Sedatole, Mike Fansler, and Steve Davis. O’Fallon Township has been honored with the NBA Program of Excellence Blue Ribbon Award and two Music For All Advocacy Awards.
Melissa Gustafson-Hinds is originally from Monmouth, Illinois. She attended Illinois State University, earning a bachelor’s in music education, graduating with University Honors. Melissa earned her Master’s Degree in Music Education from the University of Illinois, Urbana-Champaign in 2000, an educational leadership endorsement from Southern Illinois University Edwardsville and her Doctorate Degree in Teaching and Learning, with an emphasis in music, from the University of Missouri St. Louis in 2010.
Melissa is married to Evan Hinds, who is a music arranger, drill writer, and music adjudicator and additionally, serves as the Music Director for the Marching Panthers.  Together they have a daughter named Evelyn who is 5 years old. 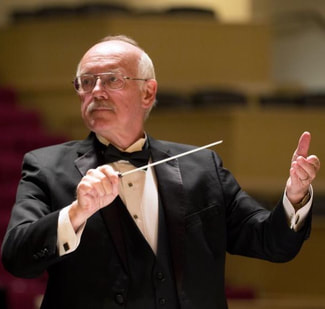 Professor Larry Gookin
Larry Gookin is Distinguished Professor and Emeritus Professor of Music at Central Washington University in Ellensburg, WA. He taught for 34 years as Director of Bands before retiring from CWU in 2015. Before coming to Central, Professor Gookin taught band in Montana and Oregon public schools for ten years. During his tenure at Central, the CWU Wind Ensemble performed by
invitation at major conferences and conventions, including the College Band
Directors National Association Conferences in Boulder and Seattle, the Music Educators National Conference in Minneapolis, the Western International Band Clinics in Seattle, the Western/Northwestern CBDNA Division Conferences in Reno, the Northwest Division NAFME conferences, and WMEA State Conferences. Larry Gookin has received numerous honors and awards. He has served as president of the Northwestern Division of the CBDNA, Divisional Chairman for the National Band Association, and Vice President of the Washington Music Educators Association. He is a member of the American Bandmasters Association and the WMEA
Hall of Fame, and he is a past recipient of the NBA “Citation of Excellence Award,” the First Chair of America “Mac” Award, the ASBDA Stansbury Award, the WIAA/WMEA teacher of the year award, and the University of Oregon’s School of Music Distinguished
Alumnus Award. Gookin was also named CWU Distinguished Professor of Teaching, and while at Central he served as Associate Chair and Coordinator of Graduate Studies. In 2016, Gookin was elected into the Northwest Bandmaster’s Association, and in 2017 he received the National Association for Music Education Distinguished Service Award. He is former principal trombone of the Eugene and Yakima Symphony Orchestras, and is Emeritus Artistic Director/Conductor of the Seattle Wind Symphony.
Professor Gookin received the M.M. in Music Education from the University of Oregon School of Music in 1977 and the B.M in Music Education and Trombone Performance from the University of Montana in 1971. Professor Gookin has appeared as clinician, adjudicator, and conductor in the United States, Canada, Japan, Southeast Asia, Europe, and the Middle East. He is a Yamaha Master Educator and remains active as a conductor, clinician, and adjudicator.
Gookin resides in Ellensburg, Washington, with his wife Karen, who is Emeritus Professor of English at CWU and recently retired on piccolo and flute from the Yakima Symphony Orchestra. 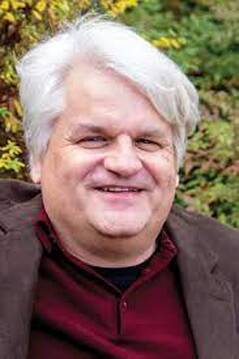 Robert Ponto - University of Oregon
Robert Ponto is the Assistant Dean for Admissions at the University of Oregon School of
Music and Dance. Prior to this appointment he served as Director of Bands for 20 years. He has
conducted ensembles through the United States, Canada, and the United Kingdom. His performing ensembles have been featured at the Bang on a Can contemporary music festival in New York, on National Public Radio, Oregon Public Radio, and have appeared regularly at state, regional and national music conferences.
A self-described “musical omnivore,” Ponto is an advocate for original music in all genres and
is actively engaged in the creation and performance of new works. He has collaborated
with many influential composers including John Adams, Steven Stucky, Michael Daugherty, Gia Kancheli, Frank Ticheli, Scott Lindroth, Augusta Read Thomas, David Crumb, and many others. He conducted the world premiere of Justine F. Chen’s Philomel with soprano Lucy Shelton and a soon-to-be-released recording of David Crumb’s Primordial Fantasy, with pianist Marcantonio Barone.
As an electronic music and sound design hobbyist, Ponto hascontributed to unique projects in that genre as well. The contemporary music ensemble, Beta Collide has performed his Postmark Sirius: In Memoriam Karlheinz Stockhausen for trumpet and live electronics, Beta Bacher (for the Oregon Bach Festival’s Bach Remix V), and a digital realization of Stockhausen’s Solo. His sound design work was also used by British pop singer/songwriter Imogen Heap on her song, “Lifeline,” for the album, Sparks. 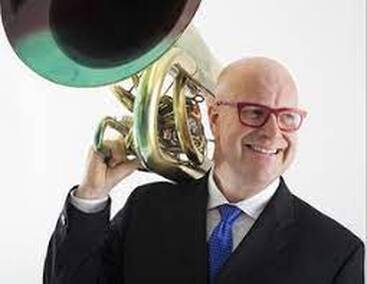 Patrick Sheridan
Patrick Sheridan is one of the most celebrated tuba soloists in his instrument’s history. He has performed more than 3,000 concerts in over 50 countries in venues ranging from the White House to NBA half-time shows to the Hollywood Bowl.At 20 years of age, Patrick became a member of “The President’s Own” United States Marine Band. Since then, Patrick has gone on to become an incredibly diverse artist with concert performances transcending stylistic genres and building fans around the world for his instrument, the tuba. He has been featured in television and radio broadcasts on 4 continents including appearances most recently on NBC’s Today Show and NPR’s All Things Considered and Performance Today.
Beyond his busy performing life, Mr. Sheridan’s commitment to education is extensive. His wind students occupy principal positions in major international ensembles including orchestras in Amsterdam, Berlin, Vienna, Rome, Paris, Madrid, Tokyo, Hong Kong, and many others. Mr. Sheridan has served on the music faculties at Arizona State University, Northern Arizona University, The Rotterdam Conservatory, The Royal Northern College of Music and The Royal Scottish Academy of Music and Drama. Most recently, Patrick served on the music faculty at the Univeristy of California - Los Angeles where he was the Director of the UCLA Wind Ensemble, the UCLA Brass Ensemble and taught tuba and euphonium. In the Phoenix community, Patrick is the Music Director of The Salt River Brass. Patrick also frequently works across the United States as a guest conductor with university bands and orchestras as well as high school and middle school all-state and regional honor bands and orchestras.
Along with Sam Pilafian, Patrick is the co-author of the world’s best selling breathing method for instrumental improvement, The Breathing Gym which was awarded the 2009 EMMY® Award for Instructional/Informational Video Production. As a composer and arranger, Mr. Sheridan's music and arrangements have been performed internationally by symphony orchestras, concert bands, marching bands, jazz bands and drum corps. Patrick’s music, arrangements, CDs, DVDs, and books are published by Focus on Music, GIA Publications, De Haske Music, Carl Fischer, Mythen Hollanda and Dillon Music Publishing.
Mr. Sheridan has over 20 years experience in the music industry as a design consultant. Instruments influenced by Patrick’s designs are played in hundreds of professional orchestras, military bands and chamber ensembles around the world. Thousands of university, high school, middle school and elementary school students play on instruments in which Patrick has been involved in the design process. He currently works as the Chief Design Consultant for XO Brass, Jupiter Band Instruments, and Hercules Stands.
Patrick is a member of ASCAP, an Honorary Member of Kappa Kappa Psi, and the Founder of The Band Director Academy, a continuing education program for music educators. He holds a Master of Business Administration degree with an emphasis in finance and marketing from the University of Michigan and spends his free time with his family hiking and camping in beautiful Arizona.
Powered by